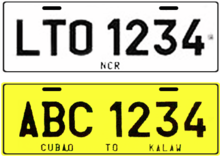 An example design of a 2014 series vehicle registration plate; Plate for private and light vehicles (Top) and for Public Utility vehicles (Bottom).

In January 2013, the Land Transportation Office ventured on the plate standardization project with modern security features which include holograms and bar codes, and also planned to phase out the old plate format which has been in use since 1981. In the new format, the LTO will issue LLL-DDDD for four-wheel vehicles and LL-DDDDD for motorcycles. The alphanumeric symbols for private cars will be black on a white background, while those for public utility vehicles (PUVs) would continue on black on yellow with the authorized route also to be indicated. Motorcycle plates would also be black on white, as would those for tricycles used for personal purposes. Tricycles used as PUVs would also continue with the black on yellow scheme. Government plates, meanwhile, would have sport red symbols on a white background, with the name of the agency/office to be indicated. Diplomatic plates would continue carry blue symbols on a white background, while Other Exempt Vehicles (OEV) would have black symbols on a light blue background. The new plate format series and design was originally scheduled for release on September or October 2013.

However, it has been delayed several times primarily due to concerns on the release of funds for the license plate project, as well as the increase in purchase of new cars using temporary license plates bearing the conduction sticker number.[5] Eventually, on May 2014, the first batch of new license plates were finally released.[6]By January 2015, vehicle owners are now required to change their old plates into a modern series plate, and pay PhP 450 for a replacement.

In 2016, the LTO issued "virtual plates" as a temporary measure to address the backlog in physical license plates. New vehicles will be issued an identification consisting of alphanumeric combinations, which will make it easier for the LTO to release the permanent license plates once they are available.